Need to license your dog? Do it online!: The City of Darlington is excited to offer digital services to all its residents. This partnership between the City of Darlington and HeyGov aims to help to engage with citizens and create a digital community. You can now fill out the dog license application by visiting this webpage or  you can download the HeyGov app and apply that way. Please have your Rabies Certificate available to attach to the application to verify the information. To download the free app: iPhones and iOS devices, download HeyGov here from the Apple iStore. Android phones and tablets, download HeyGov from the Google Play store here. You can also search the word “HeyGov” in your smartphone’s app store to find and download. 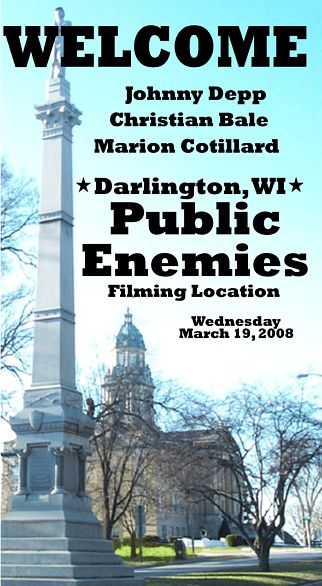 In March of 2008 Universal Studios converged upon Darlington's Main Street in order to shoot a portion of its film, Public Enemies, at the Lafayette County Courthouse. The movie was directed by Michael Mann and starred superstar Johnny Depp and Academy Award Winner Marion Cotillard. While work was done in 2008, the movie was not released until July 1, 2009.

Director Michael Mann selected the courthouse in Darlington after first visiting it and determining it was the perfect setting for the courtroom scenes in the movie. The Lafayette County Courthouse was constructed in 1905 and completed in 1907. It was exactly what Director Mann was looking for to shoot his movie based upon the true story of legendary Depression-era outlaw John Dillinger.

Thanks to the generous donation of one Lafayette County man, Matthew Murphy, the courthouse has the distinction of being the only courthouse in Wisconsin constructed with funds given to the county by one individual. It is on the National Register of Historic Places. The courthouse remains in full operation today. Visitors are welcome during normal operating hours, which are weekdays from 8:00 AM until 4:30 PM. The courthouse is prominently situated on the top of Main Street (627 Main Street).